Results of Being In Denial

We forgot to greet each other on our monthsary this September!!!! Tsk tsk tsk…very bad.

When I woke up last Saturday morning and look at the date on my computer, it read September 22, 2007, and I said “Wow, it’s the 22nd day of the month again, in four months, it’ll be my birthday again”. Then all of sudden I remembered, “Shit! Monthsary namin last Thursday!”

When hubby and I talked that night, I told him, “Uy, may kasalanan tayo….we forgot our monthsary.” He was shocked as I was. He immediately apologized and I did too. We were apologizing at each other and at the same time we were apologizing to the date itself (gets?).

Honestly, monthsarries were never a big thing to us, but we just like honoring OUR day by greeting each other. Sometimes, we give each other a greeting card, sometimes we don’t. There’s no hard rules. Basta greeting lang, happy na kami.

Anyway, I totally understand why we forgot.

In my case, I was (and I still am a bit) in denial that it’s already September. Until now, I still haven’t fully accepted that our plans did not materialize. Based on our timeline, we visualized that we’d be together for his birthday already—and that he’d even celebrate his birthday HERE in Sydney. Ganun ang plano. BUT (the biggest BUT of all) we haven’t received his visa approval yet 🙁 We never thought the application would take this long. By the end of August, super duper in denial talaga ako, na parang ayoko mag-Spring season, na ayokong mag-September muna. I really wanted us to be together for his birthday. Sa totoo lang, sa sobrang in denial ko, muntik ko pang makalimutang makapag-send ng birthday card sa kanya. Ayan tuloy, late na nyang na-receive. Kalokohan ko kasi. Lutang talaga ang utak ko. So basically, sa pagdi-deny ko, parang iniraos ko lang ang birthday nya. The message I wrote for his birthday here in my blog was one of the most painful blog entries I’ve ever written. I was crying while writing that. Celebrating Chris’ birthday was a struggle for me that’s why i forgot the monthsary, and Chris knows this.

As for Chris’ side of the story, he forgot because of his birthday and he really has tons of work right now which i truly understand. Plus, I know he also thinks about his visa approval alot coz we’re really disappointed that our plans are getting delayed.

Eto pa pala, Chris called me on Thursday morning (which was the day of the monthsary) just to say hello and good morning to me. One of his habits is that when he wakes up in the middle of the night for no reason(it’s called “naalimpungatan”), he’d call me. We were able to talk BUT we didn’t have any idea what date it was. We really can’t believe it. Technically, we talked on our monthsary but we really forgot to greet each other. 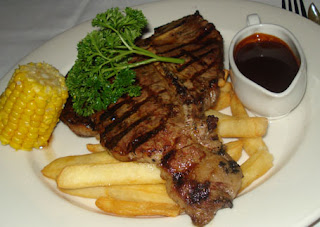 T-bone Steak at Hi-Lites Revolving Restaurant (Blacktown)
Appetizer
What is your favorite type of art?
Photography because it’s fun, easy and not easy at the same time, technical, gratifying and all other things in between to help you create something extraordinary with just a good, efficient and trustworthy camera.
Soup
When was the last time you got a free lunch (or breakfast or dinner)? Who paid for it?
My friend Hilda treated me to Indian cuisine when we watched Harry Potter 5 last July.
Salad
On a scale of 1-10 with 10 being highest, how emotional are you?
I’d give myself an 8…i can be highly emotional whenever I choose to (if it’s something to be happy or excited about, i don’t hide my feelings), plus, I have bouts of bad temper once in a while (I can be impatient sometimes). I am not afraid to say or show what I feel as long as I’m doing it in a graceful manner (read: ayoko ng iskandalo, takot ako sa away hehehe).
Main Course
Approximately how long do you spend each day responding to emails?
Oh I respond to emails constantly throughout the day at work. For personal emails (if there is any), approximately an hour.
Dessert
To what temperature do you usually set your home’s thermostat?
During winter, it’s about 27-28 degrees. During summer, it’s about 20-22 degrees.
READ MORE

I’m taking a break from stressful work at the office so I decided to play a meme. I got this from Janis Concepcion’s blog…yeah, I tagged myself hehehe.

50 first reactions …type what comes to your mind first whenever you hear these 50 words. Don’t think and don’t go back and change. Doesn’t matter how random just type it! Repost it for all of your (bored )friends.

3. Relationships: should nurture you into becoming a better person

25. Fantasy: To have a Starbucks inside my garden

: One of the best times of my life

32. The word love: is the most used and abused word

36. Time: is precious and should not be wasted 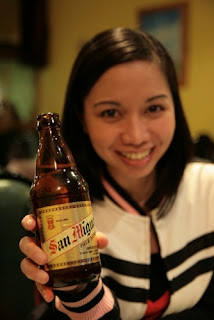 San Miguel Beer, Philippines’ best tasting beer and probably one of the best beer there is.
(photo courtesy of Larry Anda & Erick Guerrero)

Appetizer
When was the last time you visited a hospital?
November 2003. I had to undergo a major surgical operation that ended my career in badminton.
Soup
On a scale of 1 to 10 with 10 being highest, how ambitious are you? I’m an 8.
Salad
Make a sentence using the letters of a body part. (Example: (mouth) My other ukelele tings healthily.)
Everyone yearns, everyone sees.
Main Course
If you were to start a club, what would the subject matter be, and what would you name it?
I’d like a Health and Well-being Club for Wives and Mothers in order to help maintain the physical and mental well-being of busy women who takes care of a family and household. I’ll probably call it “Women, be well” Club.
Dessert
What color is the carpet/flooring in your home? The carpet’s color in the home I’m living at is sea green.
READ MORE 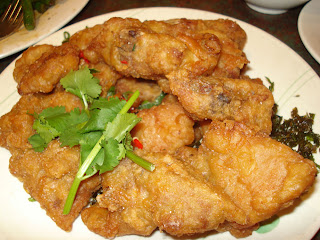 Using only one word, how does grocery shopping make you feel?

Soup
What is your favorite part about the season of Autumn?
The falling of leaves, nostalgic and very romantic.

Salad
Have you ever had any bad experiences online?
Yes, I made a serious blog entry and then somebody just mocked it or made a joke out of it.

1. Knowing that I am loved by family and friends

What one household cleansing or organizing item would you not want to be without?